Who will judge now the Greek Public Prosecutor?

Misunderstanding of the Prosecutor with the Commander of the Greek Secret Service NIS, revealed their crimes.

When the journalist Kostis P. Papadiochos wrote in the newspaper “I KATHIMERINI” on 04.05.2018 what was confided to him by the Director of NIS – Greece’s Secret Service Mr. Ioannis Roubatis a.k.a. Uncle, apparently, they had not agreed its content with the Greek Public Prosecutor…

Here we underline the fact that the Greek Secret Agent of the NIS operating in Turkey they mention in their article https://archive.ph/RKK2H#selection-1409.0-1409.26 , is Mr. Emmanouil Hatzisavvas from Agios Isidoros Rhodes and at the same time a Wanted Person with an International Arrest Warrant from the same Prosecutor’s Authority in Greece.

The Greek Prosecutor today hides himself from the incident and overlooks the crimes, while the former Governor of the Secret Service today manages several tens of millions of euros as investor together with his wife. https://www.greekcorruption.dk/en/ungle-john-giannis-roubatis-former-commander-of-the-national-intelligence-service-nis/ The money in question comes from powerful political sources of a country where a Greek Key Witness in a major drug case was found dead along with his dog in his apartment. https://www.efsyn.gr/ellada/dikaiosyni/313739_noor-one-sto-ntoympai-nekros-o-dekatos-xehasmenos-martyras

Plan to undermine the EYP

A behind-the-scenes thriller aimed at undermining the NIS and its commander Yiannis Roubatis and the possible involvement of third countries “unfriendly” to Greece is in full swing on the outskirts of Katehaki Street, according to a top official of the National Intelligence Service.

According to the above information, two persons who were “connected” with it in the past, as well as a woman, have the role of orchestrator in the attempt to destabilize the NIS. As the NIS official says, “an underground war has started from a parastate based on organized crime, espionage or both”.

The first key person in the case is a former NIS trade unionist, with a catalytic role in the past in the events of Katehaki Street, who has been permanently terminated and about whose contacts serious questions have been raised. The particular ex-employee of the NIS was found to be in possession of thousands of classified documents, while he has been accused of fraud and of illegal interference in a data file, specifically in the psychometric tests of candidates for recruitment, some of which, as the source of the service states, have been found even in… a university abroad.

The second person lives abroad, as he has been convicted of fraud in Greece, but the country he is resident refuses to extradite him. Like the first one, it targets the NIS and its administration, because it was decided to stop cooperation with him. Specifically, in 2011-2014 he lived in Istanbul and then he mentioned that he had come into contact with Turkish intelligence Agency-MIT and sent the message to Athens that he wished to cooperate with NIS. Indeed, NIS contacted him, trained him for two days in Kos Island and assigned him an “operator” in Rhodes. But, from the middle of 2015 it was found that he had nothing substantial to contribute and the cooperation with him was stopped. The third person is a woman who is allegedly related to the latter.

At the same time, as a “background”, there is also the “Pythia” case which is being investigated by the Justice and in its part about the attempt against the then Prime Minister Kostas Karamanlis, with the highest source of the NIS expressing concern about the dimensions it has taken. And this, as it is said, despite the fact that, according to information, there is a 2009 NIS document, which has not seen the light of day, in which the assessment is made that the information given to Athens was not even partially confirmed. On the contrary, the document states the assessment that the goal of the person who presented the relevant material was none other than to mislead the Greek authorities.

As mentioned above, the common target of the persons related to the attempt to destabilize the NIS is said to be its commander, Yiannis Roubatis. Thus, it is circulating in the background that “information” according to which: First, a relative of his in Northern Greece owns a company that promotes “golden visas” to Turkish nationals will soon come to light. Second, he has 20 companies in Italy through which he smuggles migrants. Thirdly, the commander of the NIS is involved in a case of sexual harassment.

As a top NIS source says, the service has been completely sealed off, and some people don’t want that… 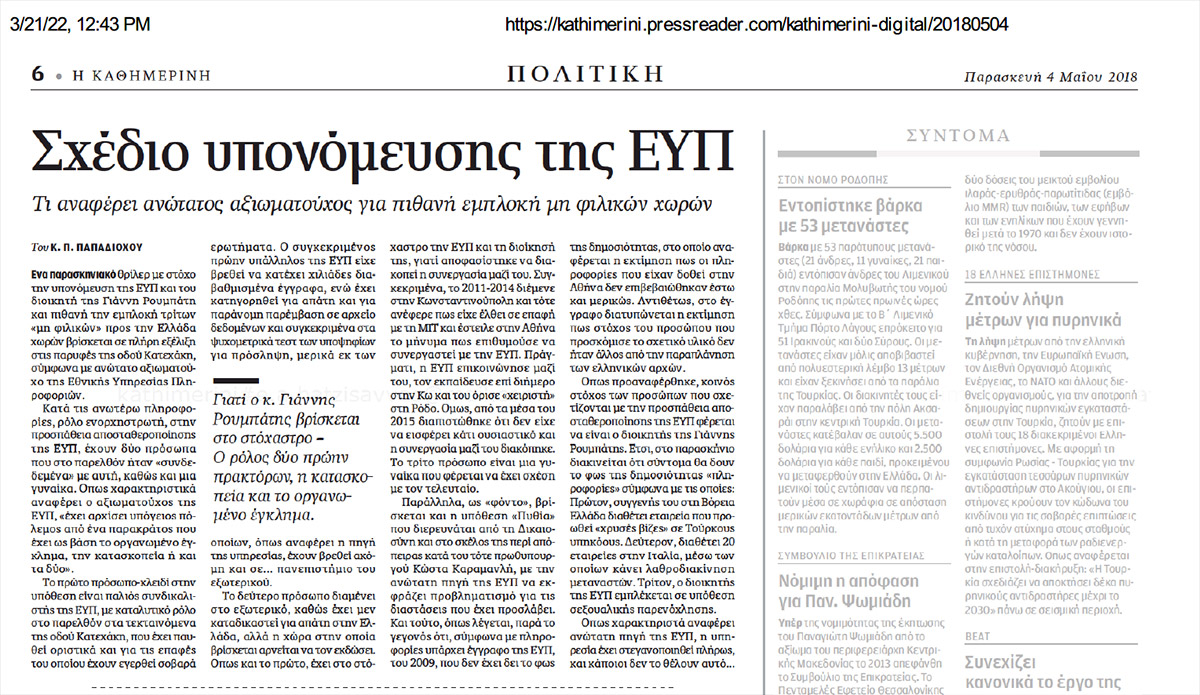