Surprisingly, they are highly regarded by the Greek government, although they have officially acknowledged that they bribe government officials, in accordance to U.S. Department of Justice’s Criminal Division’s Fraud Section and the Federal Bureau of Investigation FBI in this matter.

Pfizer CEO Albert Bourlas with Greek Prime Minister Kyriakos Mitsotakis known by his involvement the Siemens bribery scandal and the participation of his wife Maria Eva Virginia Grabowski Mitsotakis as she is involved in an offshore network of tax-based companies such as Seychelles and Panama , which have become known for serving and laundering “black” money. 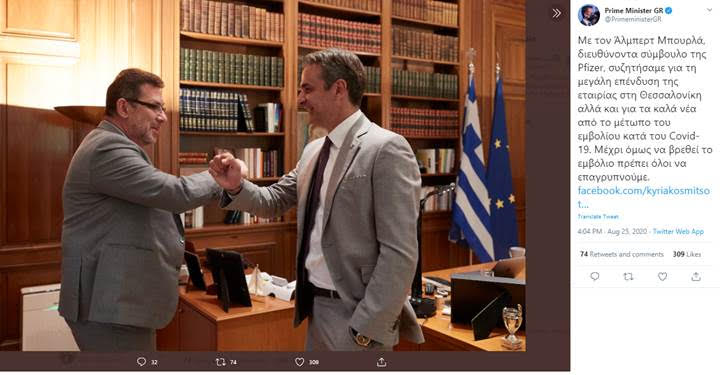 See p. 1 official Doc. Case of the American Court of the District of Columbia mentioned among others “Improper payments made to foreign officials in numerous countries by the employees and agents of Pfizer’s subsidiaries in order to assist Pfizer in obtaining or retaining business.”

The pharmaceutical company Pfizer has admitted that it has bribed a number of government officials around the world whom it took as extra “gifts” to send them for dolce vita in Greece due to its strong base and civil protection.

See p. 5 official Doc. Case of the American Court of the District of Columbia mentioned among others bribery and “Incentive Trips” to destinations in Greece.