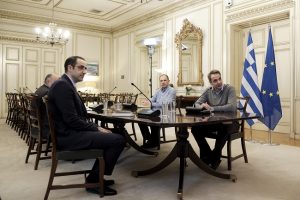 Grigoris Dimitriadis is a lawyer and the Director of the Prime Minister’s Office of Kyriakos Mitsotakis in the Government that emerged after the parliamentary elections of July 2019.

Grigoris Dimitriadis is the nephew of Prime Minister Kyriakos Mitsotakis 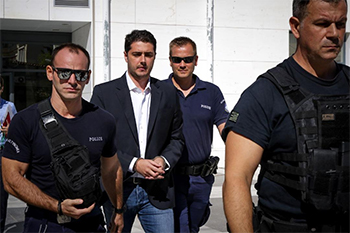 Grigoris Dimitriadis was a partner and most probably accomplice to the national robber, swindler Aristides Floros activities, which resulted in hundreds of millions of euros in damage to the Greek State, was arrested and detained in the ENERGA embezzlement case against the Greek state and many other criminal acts such the attempt of murdering the lawyer George Antonopoulos.


The nephew of Prime Minister Grigoris Dimitriadis partner and collaborator of the national robber and fraudster Aristides Floros, with the assumption of his duties as the key- holder of the Prime Minister’s Office of his Uncle Kyriakos Mitsotakis, with his activities throughout para justice networks in Greece managed to release his partner and national robber and fraudster Aristides Floros. He persuade the Appeal Court judges and recognized talents and mitigating circumstances for the national swindler and robber and as a result reduces the first-instance Court’s decision that sentenced 21 years in prison, to 5 years in prison with a three-year suspension and freed him.

Grigoris Dimitriadis is an accomplice and witness in other crimes-illegalities related to the National Intelligence Service -NIS and former agents of the agency.