With the ‘price’ unknown so far, because for no other reason such illegality can be justified, on June 14, 2022 they granted Honorary Naturalization to the foreigner so called YASAM AYAVEFE of MEHMET born on 27-9-1983 in Adana, Turkey.

This was done because THE PRESIDENT OF THE GREEK REPUBLIC Mrs. KATERINA SAKELLAROPOULOU bearing in mind the fact that the foreigner YASAM AYAVEFE has provided excellent services to the country, with his investments and the development of his business activity, he has contributed to the support of the Greek economy by promoting the in the international financial circles and therefore the granting of Greek citizenship to him may serve the country’s outstanding interest in the context of the strategic strengthening of the Greek economy.

But, YASAM AYAVEFE of MEHMET born on 27-9-1983 in Adana, Turkey is a WANTED PERSON by INTERPOL with a Red Notice for illegal gambling cases in Turkey and in the Turkish Republic of Northern Cyprus-TRBK (Unrecognized state, because it is the part of Cyprus under Turkish occupation in violation of International Law), as well as for the investigation for the double murder of casino owner Halil Falyalı and his driver in the TRNC. YASAM AYAVEFE of MEHMET is wanted as the mastermind behind the planning and instigation of the double murder. 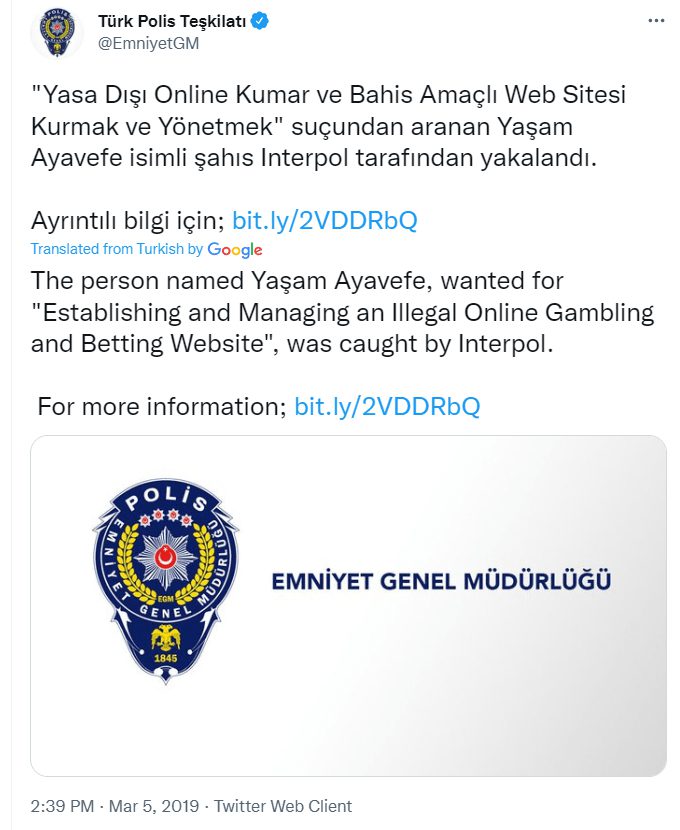 Apart from the criminal activities for which YASAM AYAVEFE is involved, and the fact that YASAM AYAVEFE has at least 4/four more Nationalities apart from the Greek one granted, those nationalities are namely first of the pseudo-state of the TRNC, which according to his statement he feels like a homeland in his heart, he still holds the Turkish nationality , the Serbian-Montenegrin nationality and the Dominican Republic nationality, although he declares his permanent residence to be England, the fact that YASAM AYAVEFE does not exist in the Turkish National Register is of great and particular importance.

According to the database, hijacked system by GR NIS (EYP) agents of the Turkish National Census that we have in GR NIS (EYP) today, YASAM AYAVEFE does not exist, except one was born after 2015.

While the name MEHMET AYAVEFE that they want to display as his father exists declared in Adana, Turkey.

The case gets even more interested when information wants YASAM AYAVEFE to be Iranian.

After all, who YASAM AYAVEFE was naturalized as a Greek and a citizen of the European Union?