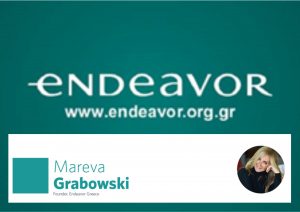 Endeavor Greece a Non-Profit Company that its founder and vice-president today is the Polish wife of the Prime Minister of Greece Kyriakos Mitsotakis Mareva Grabowski.

In parallel with other business activities that self-service her fortune, as the result of money laundering in the Seychelles and elsewhere, with her well-known associates such as Stavros Papastavrou, today Maria Eva Virginia Grabowski Mitsotaki manages millions of euros of Endeavor Greece.

The wife of the Prime Minister of Greece, Kyriakos Mitsotakis, who is involved in a network of offshore companies based in tax havens known for servicing and laundering dirty money, as if all this aggravating data were not enough for her, has recently accused, as her name appeared in public news (Makelio newspaper) as the perpetrator in an assassination attempt against Stefanos Chios a journalist and newspaper publisher in Greece.

The case of the attempted murder of the journalist and publisher Stefanos Chios remains unsolved to this day.

A remarkable feature of the professional activities of Mareva Grabowski the Polish wife of the Prime Minister of Greece Kyriakos Mitsotaki is the fact that the former vice president and general manager of Novartis the pharmaceutical industry involved in vast bribery case in Greece, Konstantinos Frouzis participated as a “mentor” in the Non-Profit Company Endeavor Greece founded by Mareva Grabovski-Mitsotaki.

It is recalled that Konstantinos Frouzis is considered the key figure in the scandalous Novartis case, as he appears to be transporting wheeled suitcases to former Prime Minister Antonis Samaras and former ministers, as well as being the “architect” of a network of influence to the Greek Government, and the Greek pharmaceutical control agency for medicine EOPYY. Numerous documents in the Novartis case involve him in attempts to influence decisions about the drug and its prices, while he also seemed to have a very friendly relationship with former Health Minister Adonis Georgiadis (currently the Minister of Development in Greece), to whom he appears in a document giving instructions on how to legislate.

The Anti-Corruption Prosecutor’s Office, headed at time by Eleni Touloupaki, has prosecuted him for active bribery and money laundering, while he has also been banned from leaving the country.

He is also listed in FBI documents as the mastermind of money laundering and for doctors through advertising or communications companies, and appears to have a special relationship with the late publisher and extortion accused publisher Panagiotis Mavrikos. [NOTE: Panagiotis Mavrikos and his whole family were killed by strangers under strange circumstances. The crimes were presented either as accidents or as suicides, although horribly they remain unsolved.]

According to the FBI report, Frouzis used the publisher Panagiotis Mavrikos -among others- to open the doors for political relations with then ministers in Greece.

According to the protected witnesses and specifically the one under code name “Aikaterini Kelesi”, he was the one who transported the wheeled suitcases to the Maximos Palace (GR Prime Minister’s Office), after they were previously notified to open the security bar and enter the precinct of the PM’s Building. He also starred in videos of the case, in which he appears to state his relations with politicians, while also starred in the organization of pre-election rallies for candidates-political executives who had a critical role in the field of medicine. And it is noteworthy that Frouzis continues to keep open channels with political families even today, after the outbreak of the Novartis bribery scandal.

From the side of the Greek Justice, the Prosecutors are waiting for wages increase in remuneration, and the Judges are following, all together they refuse to disclose their tax data, in particular they do not submit declarations of wealth, as a result their wealth of all of them remains hidden, unspecified from which activities and sources occurred.

We have been informed that these days in Greece many if not all responsible for the great robbery of the wealth of the Greek State with various illegal tricks are either released or acquitted.

Finally in Colombia we are informed that even Pablo Escobar submitted a declaration of income, hence his financial situation publicly known as well as its resources. https://en.wikipedia.org/wiki/Pablo_Escobar