Greek media corruption case of the “Newspaper of the Editors” – www. efsyn.gr

It is obvious from the documented email we reveal today that most probably for a paid fee the Greek newspaper “Newspaper of the Editors” – www. efsyn.gr agreed and propagandizing in favor of the interests of the deep Turkish state.

We know that all this is done on the orders of Turkish operators of MIT Secret Services, as in the case of “Newspaper of the Editors” – www. efsyn.gr., it publishes literally articles delivered to them by Turkish agents (https://www.efsyn.gr/stiles/apopseis/82953_mia-nea-eykairia-gia-tin-ellada-kai-tin-toyrkia-i-ekdosi-ton-prodoton ) written by Turkish politicians. Those articles resulting to serve only the political propaganda of Turkey and its President’ Recep Tayyip Erdoğan, inside the Greek Territory.

Indicative number of intercepted communication, emails in our possession at greekcorruption.dk proves the case. 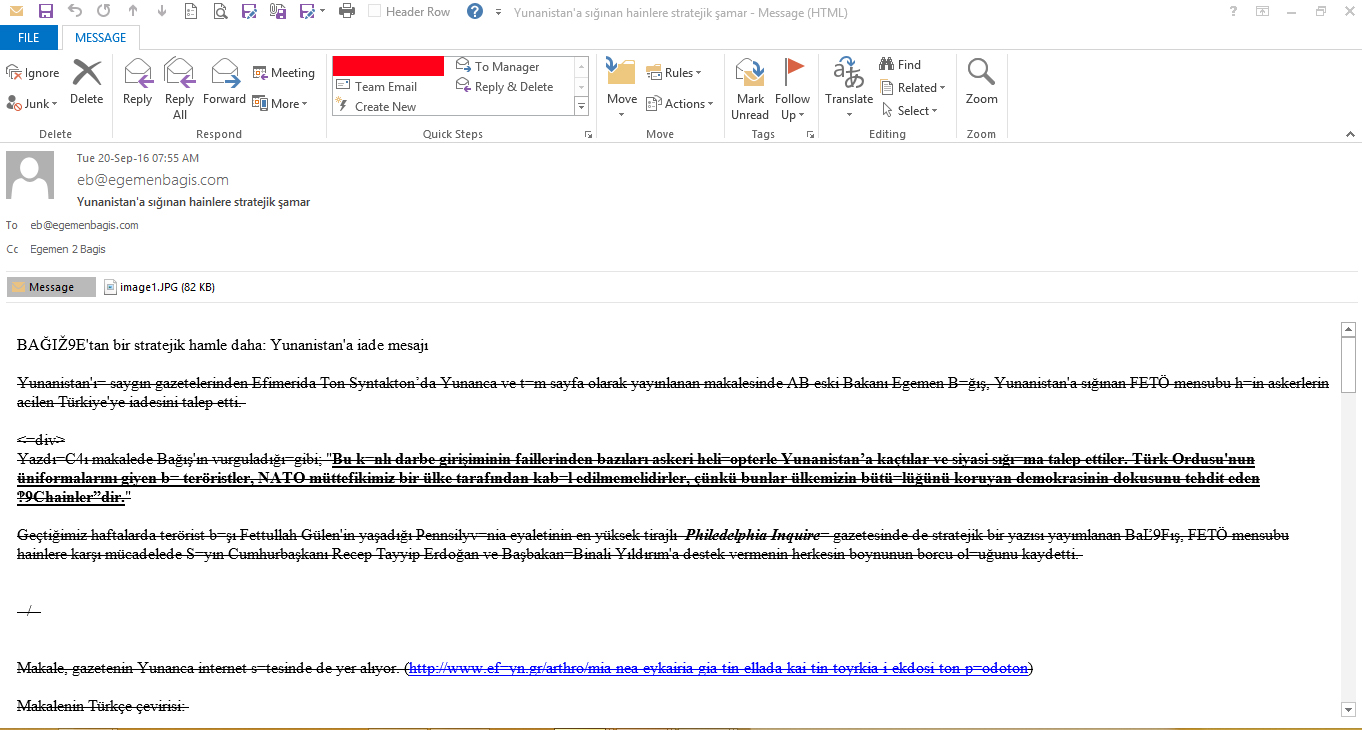 Specifically one of those emails of the Turkish politician Egemen Bağış intercepted by the NIS, the secret services of Greece and documented today, (above a fraction) resulting, of a revealing content, great meaning, and shows the world of the “underground actions” of the Greek media, how a national newspaper publish dictated articles for a fee or orders.

The attached file as shows in the above mentioned email is a photo of the actual newspaper “Newspaper of the Editors” – www. efsyn.gr., and the dictated article in question mentioned in the email. In the photo file with many red underlines shows that ALL COPY-PASTE, exactly as the “author” Turkish politician Egemen Bağış wanted to be, and paid for the GR newspaper’s services.


Who is the Turkish politician Egemen Bağış https://en.wikipedia.org/wiki/Egemen_Ba%C4%9F%C4%B1%C5%9F

That email was send one day after the publication as an informative memo to the central government of Turkey explaining that the “job” in Greece was successfully done by the “Newspaper of the Editors” – www. efsyn.gr., apparently used as proof of payment, perhaps part of the payment to justify to the Turkish associates the large amount of disbursement from the black funds of Turkey, or for the payment of the remuneration of the journalists-owners of the newspaper as a successfully achieved project.

It is not the only Greek Media that acts in this corrupt way, violating the fundamental Principles of the Journalistic Code of Ethics, primarily the law because journalistic actions of this kind offend even the state, as such action it is a betrayal of Greece.

Those of us in greekcorruption.dk who know are not impressed by the fact that many Greek media, following the corrupt political system, misinform the Greek citizens with what so ever, even lies, as long they are getting paid to write they publish successfully for their submitters those lies.

One of these notorious cases was the case of the Greek spy of NIS, Mr. Emmanouil Hatzisavvas, who acted in Turkey.

Many of the espionage findings by the secret agent of NIS, Mr. Emmanouil Hatzisavvas, did not serve the Prime Minister’s Office at Maximos Mansion in Athens, Greece because they involved in the illegal actions-findings.

Such as the cases of the “sale of Greek Passports on the black market of Turkey”, the “sale of Greek Visa Schengen by the Greek consulates in Turkey to terrorists and criminals, forgeries, embezzlement of public money and many other actions all to the detriment of Greece.

In the above cases, one of the protagonist the Greek Minister of Defense Panagiotis (Panos) KAMMENO in a forgery case of national documents, bribery and conspiracy for the sale of weapons in Saudi Arabia in order to be able to justify to the intermediaries the money he would receive as a secret reward-bribe.

As a result, the PM Office at Maximos Mansion instructed the Greek media, newspapers, television and radio stations to tarnish and expose the secret agent-spy of NIS, Mr. Emmanouil Hatzisavvas that acted in Turkey for the interests of Greece, and they order to be published a different fake story, that the secret agent-spy of NIS, Mr. Emmanouil Hatzisavvas he allegedly served that he had been recruited by the Turkish secret services, with the result that his facts and revelations were not taken into account by the public, although of the interest of the safety of Greece.

Later the same newspapers etc., media restructured their writings when revelations by the secret agent of NIS Mr. Emmanouil Hatzisavvas of the same proved the opposite, others never bothered to make corrections as they should and this because, as we know, they had been grossly remunerated by the corrupt political system, the same political system which has financially destroyed Greece.

The Newspapers, etc., media that acted on the orders of corrupt politicians, against gross wages and shady transactions, indicative were the following:

From these one can easily understand, admitted even by the biggest deniers of the truth that the content of the articles comes from the same source as everything is literal copy-paste publications.

It is worth mentioning today that a written Complaint was made and submitted to the Supreme Court’s Public Prosecutor’s Office in Athens, Greece by a citizen about the case of the secret agent-spy of NIS, Mr. Emmanouil Hatzisavvas, which officially was registered receive case number but has never been investigated despite the law.

From our investigation, the information proves that specific order given by the Minister of Justice for the investigation to stop.

From 2017 until today, October 2020, the Prosecutor of the Supreme Court does not answer our phone-calls in order to explain the reasons for following such orders and stop the investigation regarding the Greek spy -secret agent of NIS, Mr. Emmanouil Hatzisavvas, who acted in Turkey.

With the opportunity, as we learn, since Greek Politicians and Turks-agent want the secret agent-spy of NIS, Mr. Emmanouil Hatzisavvas Wanted by Interpol, the editorial team of greekcorruption.dk asks the Prosecutor of the Supreme Court in Athens, Greece to answer the following:

What is the truth, that the secret agent-spy of NIS, Mr. Emmanouil Hatzisavvas with action in Turkey is mistakenly wanted by Interpol and Europol or that the National Intelligence Service under the Order of the Prime Ministers of Greece recruited Mr. Emmanouil Hatzisavvas as a secret agent-spy of NIS, with action in Turkey although wanted by Interpol and Europol.

The Greek government cannot in both cases have acted lawfully.