Vasiliki Thanou-Christofilou is a Greek supreme judge, president of the Supreme Court since July 1, 2015 and former caretaker Prime Minister of Greece, and elected President of Judges and Prosecutors of Greece.

The name of Vasiliki Thanou-Christofilou is synonymous with the Criminal Circuit in Greece known as “libraries” with many accomplices among them the former Deputy Minister of Justice Dimitris Papagelopoulos who is being prosecuted for heaps of criminal cases. Mr. Papagelopoulos is the main person involved in the Novartis conspiracy and is accused of interfering in the work of Justice that was investigating the Novartis pharmaceutical industry scandal.

One of the biggest cases of criminal actions, judicial corruption and blackmail was the case of Vgenopoulos by the president of the Supreme Court Vasiliki Thanou, in 2016 for its financing in order to serve the biggest banker in Greece, Mr. Andreas Vgenopoulos.

Specifically, the banker Andreas Vgenopoulos revealed in May 2016, that he was asked, through a third party, for money with the “book method”, that is, to place it in a book, and that he was asked for the size of a “library”. At that time, the extradition of two of his close associates, MIG executives, from Greece to Cyprus was adjudicated.

It is a paradoxical circuit, at the top of the pyramid of Justice, which sometimes acted together and sometimes mutually harmed according to the personal interest of each of its members. The sense of innocence and omnipotence was so great that Thanou even used the office of caretaker Prime Minister in order to reap personal benefits.

Later, after his complaint, the businessman and big banker Andreas Vgenopoulos was found dead of a heart attack by his daughter Melina who found him dead and frozen on the couch of their house, November 5, 2016 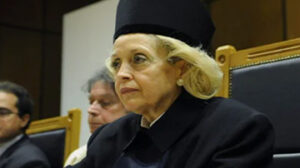